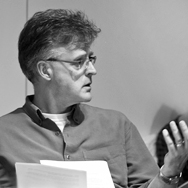 He joined the Abbey Theatre, Dublin, as a Voice Coach in 1972, before becoming a lecturer in Performance studies at Manchester University in 1975. He returned to the Abbey as a resident director in 1978. His long association with the Abbey culminated in his tenure as Artistic Director from 1993 – 1999. He has worked extensively with Irish writers such as Brian Friel, Hugh Leonard, Tom Murphy, Tom Kilroy, and Tom MacIntyre. His production of Friel’s ‘Dancing at Lughnasa’ won him an Olivier nomination and a Tony Award for Best Director. He is also closely associated with the work of Frank McGuinness and directed the premieres of ‘The Factory Girls’,‘Observe the Sons of Ulster Marching Towards the Somme’,‘Dolly West’s Kitchen’ (Abbey/ Old Vic, London), and ‘Gates of Gold’ (Gate Theatre, Dublin).